“With the strength of the Greek Diaspora as our ally, we strengthen the extroversion of Attica as a Metropolis of Health, Tourism and Wellness”

The strategy, followed by the administration of the Region in order to make Attica a dominant destination in the World Health and Wellness Tourism Maps, was mentioned by the Regional Governor of Attica, President of the Athens Medical Association and President of the Global Doctors’ Hippocratic Institute G. Patoulis in his speech on Health Tourism and the Silver Economy, at the World Congress of Greek Doctors of the Diaspora held in Melbourne.

The Congress is organized by the Global Doctors’ Hippocratic Institute and the Hellenic Medical Association of Australia and hosted by the Greek Community of Melbourne. Greek scientists from Greece, Cyprus and around the world are taking part in the conference, which is being held at the Hellenic Centre in Melbourne, with the aim of creating opportunities for joint activities and close cooperation between all Greek Medical Associations in the Diaspora.

Dr. Patoulis was welcomed to the Conference by the President of the Hellenic Medical Association of Australia, Dr. Marini Pirpiris.

In the framework of his visit to Melbourne, Mr Patoulis and members of the Global Doctors’ Hippocratic Institute attended a special event at the University of Melbourne School of Medicine, during which a cooperation agreement was signed by the Athens Medical Association and the University of Patras Medical School, aiming at the educational support of Greek Medical Students.  Patoulis: “Our vision is to make our cities and our Region “Healthy”

Patoulis opened his speech by referring to the systematic efforts made by the Greek government and tourism bodies such as the Greek Health Tourism Council – Elitour , which he is the President of, to make the country as a leading provider of long-term care and services for the elderly.

In this effort the role of local government is central, noting that as the Region of Attica, but also through the Hellenic Intermunicipal Network of Healthy Cities of the WHO, he said: “we aim to make our cities and our Region ‘Healthy’.

Our ally in this, he stressed, is the country’s comparative advantages such as climate, nutrition and the high quality scientific potential of our country and pointed out, among other things, that in the effort to win Greece’s place on the World Map of Health Tourism, the forces of science and local government have joined forces from the very beginning and emphasis was placed on strengthening the prospects of Health Tourism.

Afterwards, Mr. Patoulis, referring to the phenomenon of brain drain, expressed the belief that “the “expatriate” Greek doctors, from the parts of the world where they are currently working, and from here, Australia – are ideal to be our ambassadors for the influx of Medical and Health Tourists to our country”. And continued adding that the aim is to highlight the high scientific excellence of our country, primarily by addressing the Greek, but also foreign Medical Associations.

At the same time, as he said, the dynamics of the Hellenic Health Tourism Council were exploited through collaborations with prestigious institutions of the country in the tourism sector and noted: “this year is a moment of rebirth of the entire Health Tourism on a global scale. After three years of pandemic, global Health Tourism, Medical Tourism , Spa Tourism and Wellness Tourism are making a dynamic comeback”.

“We are trying to contribute to this effort”, Mr Patoulis concluded.

– Exploiting our authenticity and natural wealth

– And strengthening the “professionalism” of the development of the forces of Health Tourism through ELITOUR,

He added: “I have promised that we will make Attica the Metropolis of Health and Wellness of the world. And at the same time, the world’s leading Health Tourism Destination. We are working relentlessly towards this goal, and every day we are gaining a small or bigger success. As an indication, we have included Attica in the WHO’s Network of European Regions for Health and this year Attica was named “Top Sustainable Tourism Destination” of Europe for 2022, in the prestigious international tourism institution of the World Travel Awards.

In collaboration with the University of Melbourne Medical School.

In the framework of his visit to Melbourne, Mr Patoulis and members of the Global Doctors’ Hippocratic Institute visited the University of Melbourne Medical School.

At the same time, Mr Patoulis announced the organization of the first Summer School in 2023 on the island of Kos, the island of Hippocrates, the Father of Medical Science, which the excellent students of medical schools of the Global Doctors’ Hippocratic Institute will participate in. 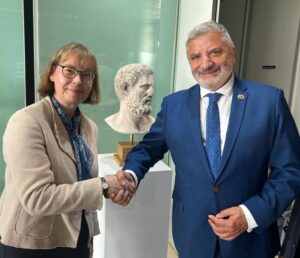 Finally, there was the unveiling of the bust of Hippocrates in the courtyard of the University of Melbourne Medical School, an initiative of the Global Doctors’ Hippocratic Institute which takes place in medical schools of universities around the world.

Attica, Australia, ELITOUR, GDHI, George Patoulis, Global Doctors’ Hippocratic Institute, Greece, Greek Health Tourism Council, Health Tourism, Hellenic Medical Association of Australia, Hippocrates, Melbourne
We use cookies on our website to give you the most relevant experience by remembering your preferences and repeat visits. By clicking “Accept”, you consent to the use of ALL the cookies.
Cookie settingsACCEPTRead More
Manage consent